Many Bibliomation libraries have closed to the public indefinitely to prevent the spread of the coronavirus. Please contact your local library staff or consult their website for more information about the services they are providing during this time.
HomeLibrary Web Site Best Sellers & Award Winners Nutmeg Awards & Nominees Charter Oak Children's Book Award Kids Catalog Get a Library Card

Life as we knew it [sound recording] / Susan Beth Pfeffer. 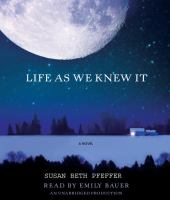 To see other titles in our catalog that have won the Middle School (Teen) Nutmeg Award, click here.

View all formats and editions (9)

Life As We Knew It
by Pfeffer, Susan Beth; Bauer, Emily (Read by)
Rate this title:
vote data
Click an element below to view details:

Life As We Knew It