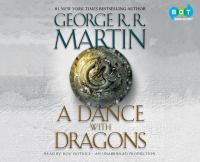 View all formats and editions (7)

Search for related items by series

A Dance with Dragons : After the Feast
by Martin, George R. R.; Dotrice, Roy (Read by)
Rate this title:
vote data
Click an element below to view details:

A Dance with Dragons : After the Feast

George R. R. Martin was born on September 20, 1948 in Bayonne, New Jersey. He began writing at an early age, selling monster stories for pennies to neighborhood children. He received B.S. and M.S. degrees in Journalism from Northwestern University. In 1986, he worked as a story editor for the CBS series The Twilight Zone. He was also an executive story consultant, producer and co-supervising producer for CBS's Beauty and the Beast. In 1970, he sold the story The Hero to Galaxy magazine. Since becoming a full-time writer in 1979, he has written many novels, stories, and series including A Song for Lya, Portraits of His Children, The Pear-Shaped Man, and the Song of Ice and Fire series. He has won numerous awards including five Locus Awards, three Hugo Awards and two Nebula awards. In 2013 he made The New York Times Best Seller List with his titles A Dance with Dragons and A Game of Thrones: a Clash of Kings, a Storm of Swords, a Feast for Crows. His title's Rogues and The Ice Dragon made the New York Times List in 2014. Martin's title, A Knight of Seven Kingdoms, A Song of Fire and Ice novel, made the New York Times bestseller list in 2015. He is number 4 on the Hollywood Reporter's '25 Most Powerful Authors' 2016 list. (Bowker Author Biography)