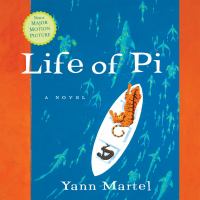 View all formats and editions (18)

Life of Pi
by Martel, Yann; Marshall, Alexander (Narrated by); Woodman, Jeff (Narrated by)
Rate this title:
vote data
Click an element below to view details:

Yann Martel was born in Salamanca, Spain on June 25, 1963. After studying philosophy at Trent University in Peterborough, Ontario, he worked at odd jobs and travelled widely before turning to writing. His works include Seven Stories, What Is Stephen Harper Reading?, and Beatrice and Virgil. He was awarded the Journey Prize for the title story in The Facts Behind the Helsinki Roccamatios. His second novel, Life of Pi, won numerous awards including the 2002 Man Booker. He continued to make the bestseller list in 2018 with his title, The High Mountains of Portugal. (Bowker Author Biography)