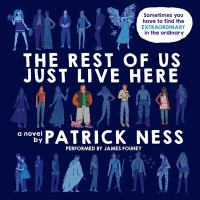 The rest of us just live here / a novel by Patrick Ness.

The Rest of Us Just Live Here
by Ness, Patrick
Rate this title:
vote data
Click an element below to view details:

The Rest of Us Just Live Here

Patrick Ness was born on October 17, 1971 near Fort Belvoir, Virginia. He studied English Literature and is a graduate of the University of Southern California. He was a corporate writer before moving to London in 1999. He taught creative writing at Oxford University and is a literary critic and reviewer for the Guardian and other major newspapers. He is the author of eight novels including The Rest of Us Just Live Here and a short story collection entitled Topics About Which I Know Nothing. His young adult novels include the Chaos Walking trilogy, More Than This, and Monsters of Men, which won the Carnegie Medal. A Monster Calls won the Kate Greenaway Medal for illustration, the Carnegie Medal, and was made into a movie and released in October 2016. (Bowker Author Biography)