Girls made of snow and glass / Melissa Bashardoust. 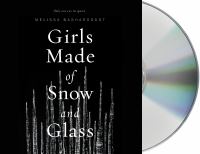 View all formats and editions (6)

*Starred Review* Lynet has grown up in the shadow of her mother, Emilia, who died giving birth to her or so she was told. In reality, she's the product of dark magic: her heartbroken father asked a magician, Gregory, to make him a daughter out of snow in the image of his late wife, the queen. Lynet chafes under her father's expectations that she emulate the mother she's never known; instead, she idolizes her steely stepmother, Mina, who's always treated Lynet with tenderness, despite believing that she's incapable of love, thanks to the glass heart her father, Gregory, gave her as a child. Alternating between Lynet's and Mina's perspectives, Bashardoust gracefully illustrates their fraught relationships with their fathers and each other and builds captivating tension between love and ambition. Mina's calculating efforts to gain power by marrying Lynet's father are in sharp contrast to the tenderness she feels for Lynet, while Lynet's reluctance to become queen transforms once she recognizes her own considerable power. Drawing from both Snow White and the Snow Queen, this beautifully wrought novel offers plenty of fairy tale wonder, but Bashardoust resists the most common tropes; instead, she tells a story where women save each other with their own ingenuity, bravery, and love, and power and compassion can exist hand in hand. Compellingly flawed characters, vivid world building, and pitch-perfect pacing make this utterly superb.--Hunter, Sarah Copyright 2017 Booklist

Gr 8 Up-When Mina fell ill, her father the magician cut out her dying heart and replaced it with glass. Unable to love or be loved, Mina learns that beauty can be used to manipulate others. At 16, she leaves the South with her father to move North where snow perpetually falls. Her father is being rewarded for curing the king's daughter, the cover story the king is using for having the magician create a baby replica of the recently deceased queen out of snow and blood. Soon after, Mina marries the king in hopes that being queen will bring her the love she desires. However, she forms a real bond with her stepdaughter Lynet. At 15, when Lynet learns what she really is, the clash for the role of queen begins. While kill or be killed is the only option Mina sees, Lynet believes she can save Mina's heart and find a happily ever after for everyone. Told in alternating viewpoints, this work uses elements from recognizable fairy tales to create an empowering novel with strong, three-dimensional female protagonists who refuse to let jealousy and power break their bond. Filled with magic, adventure, and interesting characters such as the huntsman created by Mina from glass to cure her loneliness, and Nadia the fearless court surgeon whose friendship with Lynet turns to something more, this debut will keep readers thoroughly engaged. -VERDICT A -refreshing and progressive original retelling. Highly recommended.-Marissa -Lieberman, East Orange Public Library, NJ Â© Copyright 2017. Library Journals LLC, a wholly owned subsidiary of Media Source, Inc. No redistribution permitted.

In Bashardoust's debut, a richly written rethinking of Snow White, Princess Lynet and her stepmother, Queen Mina, fight the fates imposed by their fathers. When Mina was small, her sorcerer father, Gregory, replaced her failing heart with a glass one. Gregory claims that without a heartbeat, Mina is unlovable; to disprove him, she marries the widowed King Nicholas and earns the adoration of a kingdom. Her reign as queen is only temporary, though: when Nicholas's daughter, Lynet, turns 16, Nicholas grants her rule over Mina's territory. Lynet ponders declining the power transfer, but then overhears Mina plotting against her. Further complicating matters is Lynet's discovery that she wasn't born but was conjured from snow in the late Queen Emilia's image at her father's request, leading a horrified Lynet to flee the castle. A romantic subplot involving Lynet and a young surgeon named Nadia adds further drama and tension as Bashardoust thoughtfully reflects on the complicated nature of the stepdaughter/stepmother relationship while exploring agency, individuality, love, and free will. Ages 12-up. Agent: Meredith Kaffel Simonoff, DeFiore and Company. (Sept.) Â© Copyright PWxyz, LLC. All rights reserved.