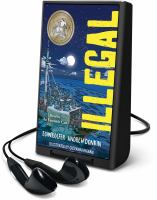 View all formats and editions (7)

Eoin Colfer was born in Wexford, Ireland on May 14, 1965. After taking a three-year degree course in Dublin, he qualified as a primary teacher in 1986. Returning to Wexford he began teaching in a local primary school by day and wrote at night. In 1991, he left Ireland and spent the next four years working in Saudi Arabia, Tunisia and Italy. Resettling in Wexford after his arrival back in Ireland, he recommenced his teaching career, continuing his habit of writing after school. His first book, Benny and Omar, was published in October 1998. His other works include Benny and Babe, the O'Brien Flyers series, and the Artemis Fowl series. He became a full-time author following the success of Artemis Fowl. The Wish List won a Bisto Merit Award in 2001. In 2015 he won an Irish Book Award in the children's category with his title Imaginary Fred. (Bowker Author Biography)

Author Andrew Donkin began writing children's comics and books soon after graduating. He is a graphic novelist and illustrator and has also written for adults. Two of his popular titles include Batman: Legends of the Dark Knight and Artemis Fowl: The Graphic Novel. (Bowker Author Biography)